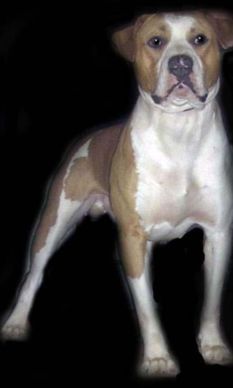 Cornerstone American Bulldog is a breeder dedicated to bringing the world quality standard performance bulldogs that are as close to the original American Bulldog as you can get. Producing sound dogs with special attention given to disposition, alertness, drive and intelligence.  We monitor temperament (as any good breeder should) by keeping our puppies around our other dogs, helping to keep dog aggression under control, this way we can effectively tailor behavior with the potential owner. The American Bulldog will instinctively be aggressive toward any animal deemed as foe/prey, which makes them great hog hunting/catch dogs. We have been breeding the Scott type standard American Bulldog for 20 years and have attained, in our opinion, dogs of the highest quality.  American Bulldog puppies from Cornerstone grow to be the epitome of what Cindy Cooke (VP of events for the UKC) says about the present day standard American Bulldog; "A dog that can work on a ranch or on a hunt for 8-10 hours a day and not get winded."  We currently have dogs that work as farm/ranch dogs, hunting dogs, therapy dogs, police dogs, border patrol dogs and one that is a protection dog at the American Embassy in Honduras for the American Ambassador and another in Bangkok, Thailand who is also a personal protection dog.  Cornerstone American Bulldog puppies are sold with full confidence that they will meet or exceed the expectations of even the most demanding dog enthusiast.

A Cornerstone performance American Bulldog is along the standard Scott Type line, which are smaller than the Johnson line and bigger than the Painter line. We strive to produce a structurally sound bulldog that is ready and able to perform any task put before it.  We have chosen our breed stock carefully to ensure strong, athletic and genetically-sound dogs for extreme performance.  A Scott type standard American Bulldog from Cornerstone can be best described by the following excerpt from Dave Putnam's "The Working American Bulldog" book:


"The Scott & Painter lines descended from farm utility dogs that have been catching wild hogs and cattle for years. This type of American Bulldog has a slightly lighter build than the Johnsons, have longer muzzles and are closer to having an even bite with any undershot stopping at a scant 1/4 inch. Males usually weigh between 60-95 lbs, though some can get up to 120 lbs. Performance American Bulldog people will refer to Williamson, Tate and Bailey as three distinct bulldog lines from Scott, but the distinctions are minor.  The Williamson American Bulldog is known for a lighter build, narrower head, longer legs and a slightly longer muzzle. Some people say these dogs are easier to train, which makes them good for sports like Schutzhound. The Tate American Bulldog is closely related to the Williamson strain, though they may have a medium build like the Scott American Bulldog and tend to have more color."

Also stated in the book:

"Common for years as farm dogs in rural areas of the American south, the American Bulldog closely resembles the bulldog of the early nineteenth century.  A couple of breeders started breeding them seriously as 'all-around' working dogs after World War ll, and that's really what they are now.  A few are used in police work and they excel in iron dog competitions."  This shows the true nature of the American bulldog, they will do an exceptional job at anything you train them to do.


Although they are not for everyone, we believe that the American Bulldog is the greatest of all dog breeds. These dogs are medium/large sized, powerful, athletic and head-strong (yet easily trainable) requiring a higher level of responsible ownership.  Irresponsible and/or uneducated owners can lead to accidents causing injury to someone, bad publicity and possible bans on the breed in certain states.  We will not perpetuate this by selling puppies to just anyone.  Cornerstone will ask all potential buyers what they intend to use their American Bulldog for, their level of knowledge about the breed and their experience with dogs of similar temperament.  We want all of our bulldog puppies to go to a home where they will be happy and taken care of properly.   At Cornerstone, we recommend that only those with the required experience and/or knowledge of the American Bulldog breed buy one of our puppies.  With proper research and understanding, the joy of having an American Bulldog far outweighs the extra efforts of responsible ownership.


THANK YOU FOR VISITING OUR SITE.